Late breaking news, no STAR BLUES tonight 29th Dec 2013. Here is what we planned to play ..

We celebrate the music of artists who died during the year, we also announce the 5th annual STAR BLUES Award winners.

Whatever your own position on the various conflicts around the world, the fact is there are too many young men and women in some dangerous and isolated places doing a difficult job - STAR BLUES in the run-up to Christmas and the festive holidays is for them.

By some distance 2013 has proved the blues is doing well, the number of new projects featuring top notch playing and songs is the highest for some time. Evidence m'lud? Two hours on STAR BLUES.

The selection was harder to make than any of the years special shows (Muddy's centenary, JFK blues and so on) but we tried to represent as many different flavours as possible, Jimmy 'Duck' Holmes comes from another time but his poignant playing is no less effective for it. Gene Pittman has also had more than one trip around the block: he has a reputation for energetic live gigs and his time in the studio had been limited: his recent project on Dialtone has attracted fine reviews and features in both Living Blues and Blues & Rhythm magazines. Top and tailing the show, two other artists deserving of far wider recognition, Larry Lamkin and Smilin' Bobby - their next outings are eagerly anticipated.

Toronzo Cannon plays a beautiful powder blue Flying-V and I've been enjoying his terrific album "john the Conquer Root" in the car. He modestly claims to be just a bus-driver who plays a bit of blues - there's a lot to be proud of here. His disc is out on Delmark who barely paused during its 60th anniversary to anchor the Chicago Blues scene during its resurgence. Lurrie Bell is there too and the album is another good'un - both men are in the running for the STAR BLUES award announced in two weeks time. Johnny Rawls is also on the list, he is the by-word for sheer quality in playing, singing, writing and production. For a couple of tracks Otis Clay joins him in a tribute to OV Wright.

2013 started off with Bobby Rush's stripped back album "Down In Louisiana" and we subsequently got two examples of wizardry that seems to appear when Bob Corritore is around, first with John Primer and then a third coupling with Dave Riley. Bob is the incumbent Artist of the Year, the decision won;t be so clear cut this time.  Billy Boy Arnold is front and centre for a pair of tribute projects (one for Walter Davis and one for Little Walter). Charlie Musselwhite didn't make the show yesterday as I've not heard either his new live recording at the Juke Joint Chapel or the one he did with Ben Harper. (The two songs on the Walter Davis were magnificent however). The most famous harp player currently working is arguably James Cotton: the voice is gone through health worries but that harp fire is undiminished; he left the singing to Darrell Nulisch for "Birds Nest on the Ground". That song was part of Muddy Waters' set and we had track from his son Big Bill Morganfield showing the apple don't fall far from the tree.

Delta Groove has had another good year with SugarRay Rayford stepping out of the shadows of the Mannish Boys to shine and Smokin' Joe's team with Bnois King never fails to please. Guy Davis is an engaging live performer and his two-hander with Italian harpman Fabrio Poggi is a good natured sparring contest. Mike Sanchez is another with a long pedigree and a proven track record of live energy and celebration of blues, boogie and rock'n'roll. His book "Big Town Playboy" is just about ready and it is sure to tell a fascinating tale. When we get more details, you'll hear it first on Britain's Other Blues Show. That's the one with the white tee shirt done live every Sunday night at 10pm (GMT). Until we can convene round your place again take care of yourselves and take care of those that take care of you

Hungry for blues which started at 45 or 78 on vinyl? Two hours? Even that was a stretch to do justice to the bag full of reissues crossing my decks this year.

We also had a short musical tribute to the "Little Ol' Bluesman" Chick Willis who died a few days ago (79 years). He had some sides out on Atco under his own name in the early years but he got a measure of notoriety for his "Stoop Down Man" single which became his trademark. Though not suitable for a family show it really characterised the influence of the genre among uniquely African American audiences and it was always at the heart of his live sets. There were a couple of albums for Ichiban before hooking up with old friend Johnny Rawls for a fabulous project on Rawls' imprint Deep South Sounds. The combination of Rawls songwriting with Chicks clipped guitar licks was hard to resist: two artists much greater than the sum of the parts. We had two fine examples on STAR BLUES as well as a cut from the 2011 album featuring Travis Haddix which picked up a STAR BLUES award. He wrote to STAR BLUES a couple of times, really pleased to know his music was going well over here, I never met him but he seemed like a gentle soul with a big heart. Much missed.

The One Day outfit  has a solid set of label surveys with selections first made between mid-50'sd and 1962. At a decent price you can use them as an introduction to the artists and old lags like me can pick up a few things to fill gaps in their collections.  Don't expect to get the lavish attention to detail that Ace / Kent label put out, theirs is a labour of love with projects compiled by fans for fans (meaning you get rare pictures, alternate takes, memorabilia, session details and the very highest fidelity from the original source tapes). The other player in the game this year deserving of the highest praise is the VEE-TONE imprint from Scotland; they have started a vinyl reissue series in the vaults of Motown and they plan more. VEE-TONE use Mark Lamarr's wealth of knowledge (and unique perspective) in compiling Blues, R&B and Rock'n'Roll anthologies of previously unissued vinyl 45s.

Fantastic Voyage and Jasmine seem to be mining the same seams at the moment and deserve mention for not simply rehashing the well-known names. As with One Day they are limited by material before 1962.  There are a number of others in the same market and by and large the fan wins out.

Wynona Carr turned up on a secular song, you'd have expected gospel but the Staple Singers did that using something they put out on a single and on the "Landlord" film soundtrack. We didn't do a special number to mark our piano spotwe'' put that right next week. Little Richards alternate lp take carried the Maceo Merriweather credit but the untreated single version had his own name in brackets underneath. We also dipped into a late period version of a song Wynonie Harris first cut in 1951. The 1960 remake put some rock'n'roll drums and an electric guitar into the mix - it failed to revive his career which had dipped with the arrival of beat groups and rock'n'roll. Our final oddity was the piece Maxwell Davis did for the Gillette (shaving) Company - other products are available.

Our 118 allotted minutes skated to a screeching halt far too soon for me but I plan to try to repeat the feat on Sunday at 10pm (GMT). You were magnificent company, until next week take CARE of yourselves and take care of those that take care of you 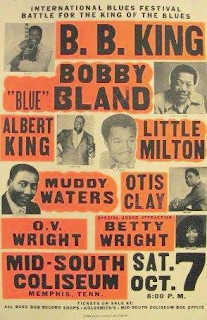 We think the date would have been 1978 for a Saturday 7th October, though the reason Muddy is so far down the bill is troubling? The failed Chess was behind him in 1975 shortly to hook up with Johnny Winter at Blue Sky by 1978 - now regarded as an Indian Summer. Mind you it was quite a contest to determine the winner of the International competition. Our playlist dabbled in the Stax back catalogue to represent both Little Milton and Albert King; Bobby Bland covered the Harlan Ellison standard "Blues In The Night" with effortless smoothness and the mainman BB King rode a jaunty steed for the saucy version of "Sell My Monkey". We're not sure what the Top Trumps score would have been, our show got us as close as possible to being there 35 years too late.

We started off with Candye Kane who has had a knock back health wise: I've never heard her complain or say a bad word about her situation, her outlook is relentlessly positive. The title track of her new project is another example of her on-stage exuberance. Jackson Sloan hails from Essex  and is helped out by Wes Weston on harp for a couple of tracks made in a good old-fashioned style. Its safe to say fans of balls-out axe finery will need to go elsewhere. WC Clark was on hand with the "Cold Shot" he did for the Black Top label, Stevie Ray Vaughan did a caustic version on his "Couldn't Stand the Weather" album.

Chicago is still reeling from the passing of Magic Slim and Jimmy Dawkins, this week Aaron Moore was taken too. He was a fine piano-player, first as sideman for Muddy and the Wolf, then in is own right as band leader on two late-blooming projects done for Delmark. If he'd been a guitarist he'd have been better feted but the two tracks we played showed how much he'll be missed. My research shows his birthdate as 11th Feb 1928 making him 85 - but his wife said he was ten years more senior.

Bob Corritore plays harp in a fluid brusque Chicago style, he has worked his magic on Dave Riley for the third time on the excellent "Hush Your Fuss" album on Vizztone. On the south side of Chicago, Sam Cooke and Lou Rawls hang out together and made their first steps into gospel bands. We went to something Lou Rawls did before his National Service in 1955. Wynonie Harris has a two disc anthology on Fantastic Voyage of definitive recordings and we ventured pre-war for Casey Bill (and the prolific Black Bob) and for a reminder of Tommy Johnson's power.

There's just four more shows in 2013 and we are struggling with settling on our annual awards, we'll see if things get any clearer next Sunday at 10pm. Until then take care of yourselves and take care of those that take care of you